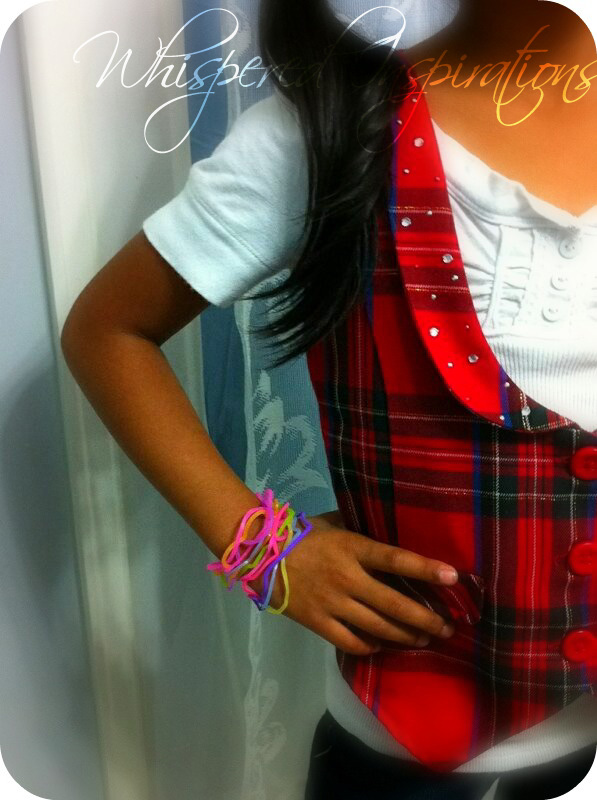 As I stood patiently awaiting my little girl to burst through the doors when the last school bell let out, the cold air was hitting my face, it was no different from any other day. I chit chatted with the other moms and dads about the weather and the latest happenings of Grade 1 as I scanned the ocean of children for Gabriella.

The only thing different was that I had my eye out for something. Since Gabs brought it to my attention, I thought I’d take a peek. On the other hand, I must have looked like a crazy lady scanning these children.

What was I looking for you ask?

And my word, they are EVERYWHERE!

I swear every kid that walked past me had their arms almost up to their elbows in these things. Kids Gabs age, kids a few years older. Kids taller than me–wait, half of them ARE taller than me.

Anyway, some of them were running hand in hand towards the bus, skipping with thier little arms adorned in them. (Perhaps, being swallowed by them… Yeah, that sounds about right.) So, I found them alright and it’s like an epidemic.

I bet you’re wondering what the heck they are and what they’re for, huh?

Well, the way my husband and his buddy describe them (his 9 year-old daughter is addicted too), some guy, somewhere, stuck a rubber band in a microwave and POOF! He single-handedly and quite haphazardly invented Silly Bandz.

But forreals, they weren’t really invented that way, they just are seem that useless.

Well, they are rubber bands shaped in various shapes and forms. All different colors, glitter, glow-in-the-dark, you name it. They got it. Not only has Disney jumped on board, they come in Disney Princess form and Disney Cars form and frankly any shape you can imagine. Boots, lipsticks, crowns, animals, dinosaurs! There’s even knock-offs. I believe they are called Wacky Bandz!  And guess what?

After much debate and quite frankly a bit of investigation (Lord knows what kids do nowadays with these things), I gave in and this is what happened.

And this is only half of what I let her leave to school with!

There are various ways to play with them, most of all they are used to trade and compare shapes, you can also use them for tying hair but it’s not really recommended due to snagging. She was happy to report to me today that she traded sunglasses for another crown and now has 4 Princess crowns in her collection.

So, how is the school system taking the craze? Currently, I haven’t heard anything from Gabriella’s school specifically. But across quite a few states in the US, they have been banned. They are now contraband and forbidden in schools due to distraction and sometimes injury. Since Silly Bandz are made out of 100% recycled, medical-grade silicone, there has been reports that kids with an allergy to silicone have broke out with rashes from the bands. There have also been reports that by wearing too many Silly Bandz at once, it can cut off circulation and cause injury.

The way I see it, I’m down if Gabriella wants to jump on the Silly Bandz craze. After all, our generation had its share of fads, who can forget Slap Bracelets and POGS, c’mon now! Even marbles back in the day.

The thing I like about these rubber band things is that they’re a non-aggressive game that promotes sharing so, I’m down. They run you from about $1-$5 per dozen just in case you’re wondering. If the craze hasn’t hit your city or local school yet, oh it’s coming! Just make sure you don’t allow your kids to go to sleep with them on or put them up in their hair to create a makeshift bird’s nest for you to comb through! Or worse, cover every inch of their bodies in them and of course not to use them if your child has a silicone allergy.

And most definitely don’t send them to school like this:

The only thing I don’t like about these damned things is the fact that I didn’t invent them.

Well, like any toy we purchase for our kids, it’s up to us to deem them worthy and safe for them to play with! Have the Silly Bandz made their rounds at your kid’s schools yet? They have been around longer in the US and are just starting to hit Canada this year. I’d love to hear your silly kid fads for sure, so lemme know!

Were your kids obsessed?

Let me know, til then, cheers m’deres!