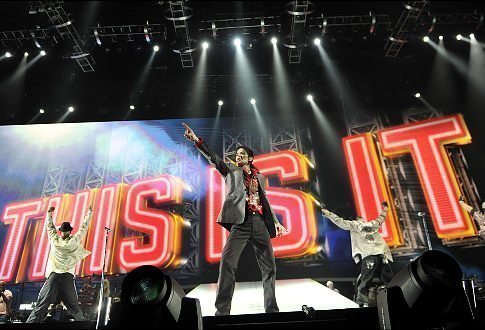 So, I watched the movie: This Is It.

All I can say is that it was pure brilliance and genius and would have held its place in history for what it could have been. In fact what it was and what Micheal Jackson has always been. Most importantly what he would have given to the world if this tour would have realized.  In essence, they were rehearsal performances yet still breathtaking.  MJ in his age still knew every move to every beat and perfected his craft.

This behind the scene look at how thought out and how much attention to detail entails when it came to his shows. He truly was a perfectionist and you can see his King of Pop persona yet the kindness of the man he was.

The dance sequences were spectacular and each song was perfect.

The short films that were included as intros for each song were amazing. The wardrobe would have been out of this world.

I’m truly happy that this film was documented not only for his fans but for generations to come. To see that some people have a destiny and are here and meant to do what they do.

MJ was one of these people.

They say that every 100 years a genius like him comes along.

So, I left the theatre a bit shocked that I didn’t shed more tears than I did. I left entertained and in pure awe of a master of his craft. The only disappointment was that he wasn’t able to really perform his last curtain call.

I even recall telling my sister after having seen the press conference of ‘This Is It’ and hearing the announcement of his London shows, that after the 50 it might have gone to a worldwide tour. I told her I would have paid ANYTHING to see him.

And I would have

Michael couldn’t have said it any better than he did in this film. Love lives forever.

Even if he’s gone, he left his impact in my life. He left his message in his songs and he did it with Love.

Gone but forever in my heart.

P.S.- I made it onto the This Is It banner along with Gabs, not once but TWICE. Don’t forget to hit me up on Instagram as WhispersInspire.

Did you love Michael Jackson?

You're not getting older, you're just becoming a c